Zevenbergen, Chisholm cash in at ‘The Creek’

Zevenbergen, Chisholm cash in at ‘The Creek’

On the final corners of the final lap of the 20-lap feature race, Anderson made his move as he dropped to the bottom of the race track for the first time all night and briefly grabbed the lead, but Zevenbergen fought back and pulled out the victory by a mere 0.179 of a second.

In the Summit Racing Equipment “A” Main for the B-Mods, polesitter Ben Moudry of Protivin, Iowa, made the most of his starting spot as he held the point for the first eight laps of the race. On lap nine, two-time reigning Iron Man champion Dan Hovden of Decorah made his way through traffic from the sixth starting spot and got around Moudry for the lead.

Hovden continued to separate himself from the field for the next six laps but was forced to retire from the race with mechanical difficulties just five laps from the finish line and handed the lead over to Jim Chisholm of Osage, Iowa.

Chisholm, who has two feature wins at ‘The Creek” already this season, held off a late charge from Moudry to claim the $900 feature win. Jared Boumeester of Waseca, Minn., was third, Alex Williamson of Rushford, Minn., claimed fourth and Kadden Kath of Owatonna, Minn., finished fifth. 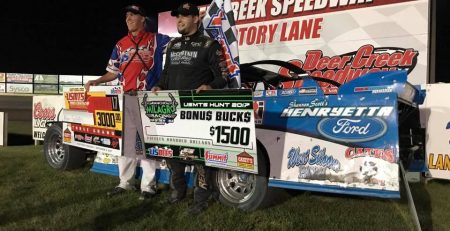 Ride along with Terry Schultz in his #90 USRA/USMTS Modified during the Featherlite Fall Jamboree at Deer Creek Speedway... read more

Ride along with Justin Johnson in his #7J USMTS/USRA Modified during his heat race at Deer Creek Speedway in... read more 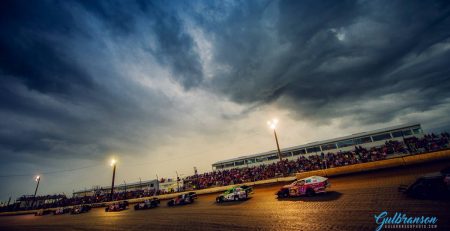 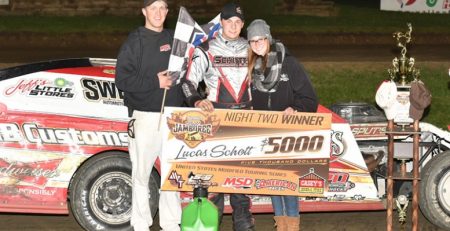