August 25, 2018 Blake Trucking slingshot races at Deer Creek Speedway in Spring Valley, MN came to a close on a hot and muggy afternoon on the Button Buck track. For some of these drivers, this may potentially be their final points race of their slingshot career making this race bittersweet.

The Junior class was led by the 43 of Koby Wagner with the 7C of Curtis Parmenter on his outside. The 59 of Mason Stockhausen started second row inside. With the 43 of Wagner having the 2018 points locked in, todays race was all about having fun! As the 43 stretched out his lead, the 59 of Stockhausen was putting heavy pressure on the 7C of Parmenter for second place. The 7C of Parmenter was able to hold him off until the last few laps where he lost control coming out of turn two allowing Stockhausen to slide by. Parmenter later spun in turn four to bring out a caution and restart. Stockhausen was looking to challenge the 43 of Wagner with only 2 laps to go on the restart, but came up short to finish in 2nd place ahead of Parmenter in 3rd. Wagner crossed the checkered flag for one final win of his 2018 season and the title of Junior Slingshot points champion.

The Senior slingshot feature was led by the 20 of Gage Motl with the 29 of Lilli Reps on his outside. Inside second row was the 8T of Toby Kennedy with the Kolt34 on his outside. Third row inside was the 25 of Joe Chisholm. For the first three laps the 20 of Motl and the 29 of Reps ran side by side battling for that lead position. Reps managed to get underneath Motl in turn four to pull out ahead for the lead. The 8T of Kennedy was hanging onto third place ahead of the Kolt34 and the 25 of Chisholm. Without a caution in this 18-lap feature, the 29 of Reps was able to stretch out her lead ahead of Motl to bring home her third feature win of the 2018 season and third place in the points results. She was followed by the 20 of Motl, the 8T of Kennedy, the Kolt34 of Brauer, and the 25 of Chisholm. Points Champion resulted in a points tie between the 20 of Motl and the 25 of Joe Chisholm. There is no tie breaker rule in the slingshots, so they will proudly share the championship for the 2018 season.

Heat race winners were the 43 of Koby Wagner and the 7C of Curtis Parmenter in the Junior Class, and the 29 of Lilli Reps in the Senior Class. Congratulations to all the slingshot drivers on another exciting season! Good luck to those senior racers who will be leaving the slingshot class and continuing on with their racing careers on the big track!

SPRING VALLEY, Minn.—It was a night of champions Saturday at the Deer Creek Speedway as Tom Schmitt and Cory... read more

Ride along with Jake Lampert in his #11 USRA Iron Man Stock Car during his heat race at Deer... read more 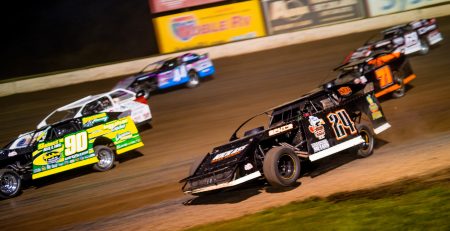