Spring Valley MN – July 19, 2014:  (Photo courtesy of Jamie Goff Photography)   A huge thank you to the Minnesota Corn Growers for their Tasseldega Nights promotion as a record setting crowd was on hand to take advantage of the free admission to the races. A special thanks to all of those organizations and businesses who were on hand to provide solutions and answer questions about corn production and ethanol production. Those on hand learned many facts about ethanol and corn production.

The first race of the night was the Six Two Graphics WISSOTA Street Stock Feature event. Fred Prudoehl and Kory Adams charged out of turn two trying to settle the top spot. On the completion of lap one Prudoehl took the spot. Kyle King sat in third and pulled alongside of Adams for the second spot. Behind them Nick Schwebach and Mike Blowers battled for the fourth spot. With five down Schwebach dispatched Blowers and moved under King for the third spot. Schwebach and Adams made contact battling for second on lap six but both continued on. On lap seven Adams pulled alongside of Prudoehl for the lead. Adams took the spot with Schwebach following past Prudoehl into the second spot. Blowers and Jason Barber started a race for the third spot now that continued for the next five laps. A caution flew on lap fifteen and on the restart Adams and Schwebach battled for the top spot. As the two raced through three and four Schwebach’ s car slid up the track and Adams tried to find a little extra room up top but ran out of room scraping the outside wall and allowing Schwebach to pull away for the win. Heat races were won by Barber and King

The next feature on the track was the Dirt Doctor Trucking WISSOTA Midwest Modified with a three wide race for the lead out of turn two we all knew it was going to be a good one. Bryan Hernandez came out of the battle with the top spot. Dustin Scott and Casey Trom raced for the second spot. Scott took control of that spot on lap two while Cory Crapser moved past Trom for the third spot. Josh Crary took over the fourth spot on lap four while Dan Wheeler, Jacob Bleess, Jared Boumeester and Andrew Bleess where four wide for sixth behind Trom.   Boumeester took the spot them moved past Trom for the fifth spot.   With ten down the action up front heated as Scott and Crapser battled for second and gained ground on Hernandez up front. Crapser, Hernandez and Scott were now three wide on lap eleven with contact made and a caution flew over the field with Scott restarting at the tail. Hernandez again took off into the lead and with fourteen laps down J. Bleess, Boumeester and Crary were three wide for the third spot while up front Crapser pulled alongside of Hernandez and took over the top spot. Boumeester took over the third spot and as the checkers were falling over the field he flew into turn four and slid up in front of Hernandez for the second spot. Hernandez was prepared and immediately cut back down and regained the second spot as they crossed the line. Crapser took home the win followed by Hernandez, Boumeester, Crary and J. Bleess. Jonathan Olmscheid started twenty first and finished sixth. Heat races were won by Wheeler, Hernandez and Boumeester.

Victory lane for the Wagner Trucking WISSOTA Super Stock feature lane was very emotional after a father son duo crossed the line one, two. Schatney Sanders jumper out to the early lead with Ed Sanders in second. Brian Fetting jumped into third after clearing Dave Solum on lap five. Jeff Brauer started to move towards the front and took third away from Fetting on lap seven. Gary Wiersgalla moved past Solum for the fifth spot on lap eight. Brauer started to put pressure on Ed Sanders at the halfway point but was unable to make a pass. On lap sixteen Fetting got around Brauer for the third spot but by lap eighteen Brauer worked back into the third spot. At the finish it was Schatney Sanders with the win followed by his dad Ed in second. Brauer, Fetting and Wiersgalla rounded out the top five. Heat races were won by Wiersgalla and the old veteran Harlan Morehart who had the crowd cheering for him as he held off Brauer for the win.

Another huge field of 36 Elma Performance and Fabricating USRA b-Modifieds pulled into the pit area tonight. Shaun Walski and Kylie Kath took home the “B-Feature” wins. Ben Moudry and David Pitz paced the field for the feature event.   Moudry took the early lead while they battled four wide for the fourth spot. Erik Kanz worked into second early on while the first caution flew on lap four. On the restart Kadden Kath and Kanz were side by side for the lead with Moudry now in third. Another caution flew on lap six. On the restart Kath took the lead while Moudry and Kanz battled for second. Kylie Kath moved into the third spot on lap nine. Jacob Bleess worked into the top five on lap ten and on lap eleven took over the fourth spot. Shaun Walski and Cory Crapser battled for the fifth spot as a final caution flew on lap fourteen. On the restart Kadden led with Bleess and Kylie Kath racing for the second spot. Cole Queensland and Kanz battled for the fourth spot as the laps wound down. At the finish it was Kadden Kath with his first ever feature win at the speedway ahead of Bleess, Kylie Kath, Queensland and Walski.

The final race of the night was the NAPA Auto Care USRA Modified feature event with Josh Angst jumping out to the early lead. Brandon Davis quickly moved past Joel Alberts for the second spot. Keith Foss and Lucas Schott rounded out the top five early on.   Foss moved past Alberts for third on lap three with Schott and Alberts now racing for fourth. With five down Foss continued his charge forward moving around Davis for the second spot.   Jason Cummins moved past Alberts to take over the fifth spot while Foss challenged Angst for the lead. Foss led lap eight while Schott and Davis battled for the third spot.   Schott took the spot with Cummins moved past Davis for the fourth spot on lap eleven. Schott moved into second on lap thirteen. A caution flew on lap eighteen and on the restart Foss led while Davis made a strong move into the second spot. Brad Waits worked into the top five. With twenty two down Cummins moved into third as Schott started to slide back as the top side started to fade. With twenty two down Waits moved into the fourth spot and on the next lap shot under Cummins for the third spot. At the finish it was Foss with the win, Davis, Waits, Lance Hofer and Cummins rounded out the top five. Heat races were won by Alberts, Dustin Scott, Davis and Waits.

Season Opener Postponed at The Creek 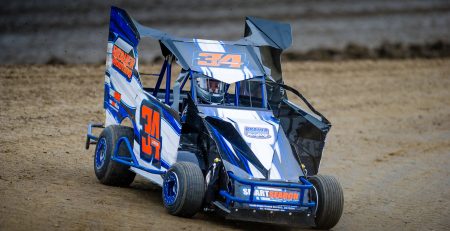 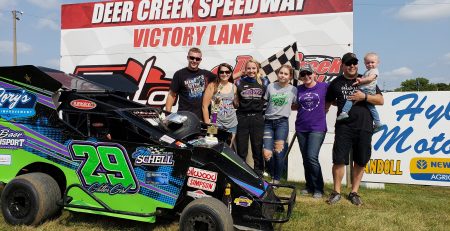 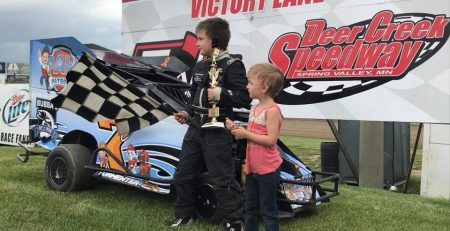