The fans were packing the stands for Tasseldega Nights on Saturday, July 11, as the KC Lawncare Slingshot races at Deer Creek Speedway in Spring Valley, MN got underway. The kids were once again ready to wow the crowd with their showmanship in their slingshot cars as they speed around the track. As the slingshot series gets ready for a three week break from racing at Deer Creek Speedway, the battles are just beginning to heat up in the points in these three race classes.

The pee wee races were down in numbers this week with only 3 cars there to race, the 43 of Koby Wagner, 8T of Toby Kennedy, and the k34 of Kolton Brauer. Unfortunately, the k34 of Brauer had to pull off the track before the start due to mechanical troubles with his car. On the start, it was the 8T of Toby Kennedy who pulled out to an early lead ahead of the 43 of Wagner. Kennedy led 6 laps of this 10 lap feature race and was looking smooth, until his car also began having mechanical issues allowing the 43 of Wagner to pull ahead for the lead and once again take the checkered flag this week in the pee wee class feature race. With Wagner clutching this win, he now pulled ahead of Kennedy by 5 points in the point standings in the pee wee class. Calling all pee wee drivers, we need more cars! We hope to see all the pee wee drivers back in their cars and ready to race again soon!

The junior class had 7 slingshot racers this week. Unfortunately, the 7 car of Peterson wasn’t able to run the feature due to mechanical issues during the first heat race, however, everyone was happy to see Jordan Peterson back in his car after a hard hit last week took him out of the feature race. The 34jr car of Braden Brauer was your race leader this week with the 20 car of Gage Motl on the outside. Second row inside was the 25 car of Joe Chisholm with the 12 car of Ayden Howard on the outside in 4th place. The 28jr car of Devin Born started in 5th, and the 77 car of Hunter Kennedy wrapped up the 6th place starting position. Brauer was fast on the start, but Motl in the 20 found his groove early in turn 2 and pulled out ahead of Brauer for the lead. A battle ensued behind Motl between the 34jr of Brauer, the 25 of Chisholm, and the 77 of Kennedy who had moved himself up in the pack after starting in 6th. Three separate cautions put Chisholm, Brauer, and Kennedy to the back forced to work their way back through the cars, while the 12 of Howard and the 28jr of Born proved that sometimes patience in the name of the game with both drivers moving up from the backfield into the top 3 after the cautions and determined to hang onto a top 3 finish. Motl continued to lead the pack through this 12 lap feature race and with 1 lap to go, a caution flag brought out a green, white, checkered finish. Motl didn’t let up and was able to cross the checkered flag for his second junior class feature win. The patience of Born delivered him a 2nd place finish behind Motl, while the skilled driving of Howard in the 12 finished in third place. The 25 of Chisholm finished in 4th place this week, followed by the 34jr of Brauer in 5th, and the 77 of Kennedy in 6th. Less than 10 points now separate Chisholm, Brauer, and Motl in the point standings for this junior class.

The senior slingshots had 5 cars this week for their 18 lap feature. After the redraw, the 24 car of Jim Chisholm was your race leader, with the 44 car of Karlie Wagner alongside him in 2nd. The 60 car of Colby Mann started in 3rd and the 53 car of Tianna Mithun in 4th. The 18R of Evan Reyna wrapped up the 5th place starting position. Out of the gate, it was the 24 car of Jim Chisholm who ran away with this race early on looking smooth and steady. The 60 car of Mann maneuvered around the 44 of Wagner who after some contact with 53 and 18R coming out of turn four fell back in to the 5th. The 53 of Mithun tried to chase down Mann, but wasn’t able to close that gap and Mann continued to hold onto 2nd furiously trying to catch Chisholm. While the 24 of Chisholm widened his lead, the 18R of Reyna narrowed the gap between him and the 53 of Mithun with every lap. At the finish, it was the 24 car of Jim Chisholm taking the checkered flag. The 60 car of Mann crossed in 2nd and the 53 of Mithun clutching 3rd. The 18R of Reyna finished in 4th, while the 44 of Wagner crossed 5th. The 4W of Tucker Williams was unable to race the feature due to mechanical issues. Only 20 points now separate our top two race leaders of Mithun and Wagner in the senior class at this time. 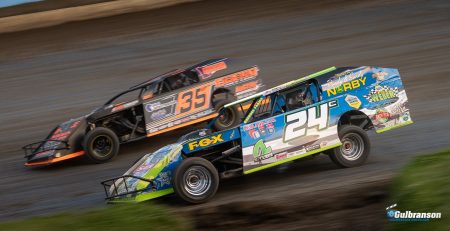 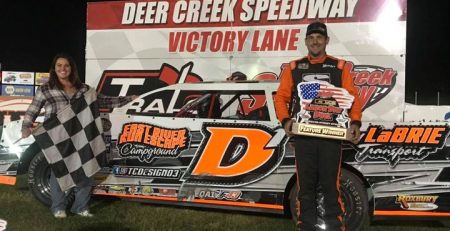 Spring Valley, MN (September 5) By: Todd Narveson The Adams Graphix WISSOTA Street Stocks were one of the divisions that took... read more 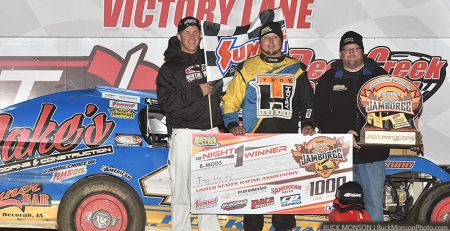