SPRING VALLEY, MN – Sept. 13, 2014:  (Photo courtesy of Gulbranson Photo)  A cool fall like day greeted a great crowd on the annual Asgrow/Dekalb Clash at the Creek featuring the World Of Outlaw Sprint Cars. A great field of 33 Sprint Cars arrived at the speedway to do battle on the highbanks of “The Creek”

David Gravel took to the racing surface in his time trials and ripped off a 11.416 lap with an average speed of 118mph setting a new track record and topped the charts during qualifying. Paul McMahan was close in second with a 11.480 lap with 22 drivers under the 12 second lap average. 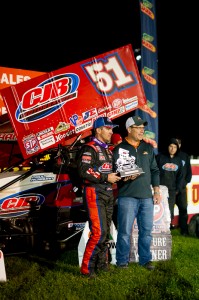 The first feature of the night was the USRA Iron Man Stock Cars with Kyle Falck jumping out into the early lead with Brandon Hare in second. Brian Webb took over the third spot early as they battled side by side behind the top three. Webb moved into second on lap two with Dillon Anderson following through into four. Falck continued to look good out front and slowly started to pull away from the field while Webb, Anderson and Kevin Donlan ran nose to tail for the next three positions. With nine down Anderson broke the left front of the car ending his night. Donlan moved into the second spot on lap ten as the only caution for the event waved. On the restart Falck led with Donlan in second. Tom Schmidt and Webb battled for third while Mitch Hovden worked into the top five.   Hovden, Schmidt and Webb battled hard over the last few laps running three wide for the second spot. Hovden took over the third spot as the white flew over the field. At the checkers it was Falck with the win followed by Donlan, Hovden, Webb and Schmidt. Heat races were won by Hare, Shawn Peter and Webb

The final race of the night was the World Of Outlaw Sprint Car feature event. Paul McMahan jumped out front going into one. David Gravel got a great run off two and pushed McMahan down the back stretch. The first caution flew when David Heskin flipped in turn two. On the restart McMahan again jumped out front with Gravel in second and Joey Saldana in third. By Lap six Saldana was all over Gravel trying to take over the second spot. Gravel held onto the second spot as the leaders started to work heavy traffic by lap thirteen. McMahan worked the slower cars quickly and pulled out to a straightaway lead. A caution on lap nineteen reset the field with McMahan leading. Gravel, Saldana and Craig Dollansky exchanged slide jobs on the restart with Gravel resuming the second spot as the lap completed.   Kerry Madsen worked into the top five and on lap twenty five took over the fifth spot. By lap twenty six McMahan was again working slower cars. The final caution flew on lap thirty two as Saldana had the right rear explode on his car. McMahan led on the restart with Gravel in second. Madsen worked into the third spot. At the finish it was McMahan with the win, Gravel, Madsen, Dollansky and Daryn Pittman rounded out the top five. Brad Sweet came home sixth after starting sixteenth on the field.

Racing resumes next week with the Annual Featherlite Fall Jamboree with practice on Wednesday and racing on Thursday, Friday and Saturday. The USMTS cars will be racing for a possible $20000 check if the same driver wins all three nights. All on hand for the week will be the Iron Man USRA B-Modfieds. 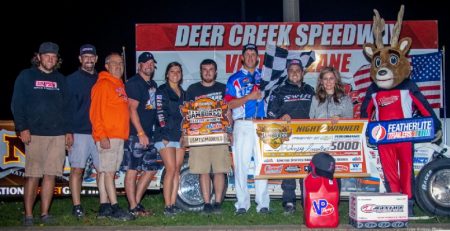 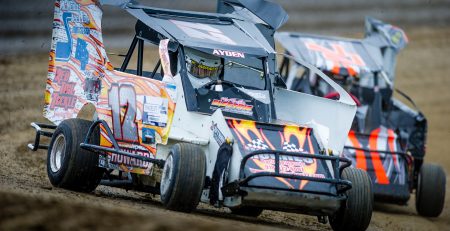 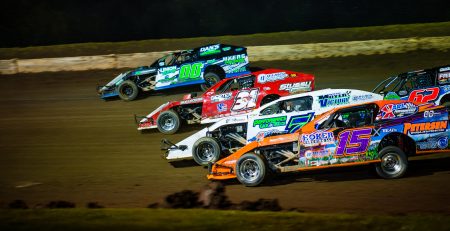 Error type: "Forbidden". Error message: "Access Not Configured. YouTube Data API has not been used in project 92057048126 before or it is disabled. Enable it by visiting https://console.developers.google.com/apis/api/youtube.googleapis.com/overview?project=92057048126 then retry. If you enabled this API recently, wait a few minutes for the action to propagate to our systems and retry." Domain: "usageLimits". Reason: "accessNotConfigured".