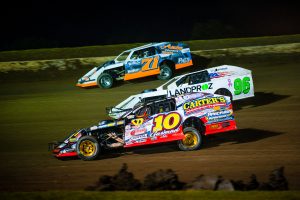 Ninety-six Modifieds and 55 SportMods were entered with the total car count of 151 the highest in the 27-year history of the Clash, which played out before a very full grandstand. Seventeen states and Canada were represented.

“To win the Harris Clash means a lot to me. I’ve never been able to get it done before,” Carter said. “To come to Deer Creek and win the first IMCA Modified event here is pretty amazing.”

Carter had moved steadily through the field and into the top three with 10 circuits to go and was in the right spot at the right time when frontrunners Kyle Strickler and Richie Gustin, both two-time Clash winners, got together with four laps left.

He took charge from that point, winning his career first Clash crown ahead of Troy Cordes, Bran­don Davis, Adam Hensel and Mike Hansen. 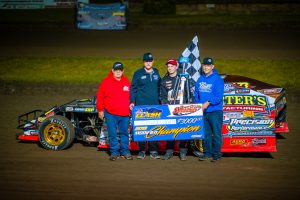 “Sometimes it’s better to be lucky than be good,” said Carter, who had drawn the 198 pill (out of a pos­sible 200) and started last in the 11th of 12 heats. “We ran second in our heat, then won our ‘B.’ Everything just kind of came together for us.”

Cordes had started outside the front row and led past halfway of the 30-lapper, surrendering the front spot following a restart to “B” qualifier and Wehrs Dash at the Clash winner Gustin.

Another two-time Clash winner, Kelly Shryock, earned hard charger honors this time around by racing from last in the field of 25 to sixth. 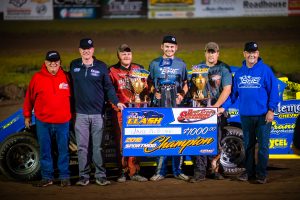 McBirnie emerged from a late dustup in the Northern SportMod feature after Jared Boumeester led most of the 20-lap contest. Boumeester and Johnathon Logue tangled and Boumeester was sent to the rear of the field and ultimately the pits; McBirnie then motored past Logue following the second of two restarts en route to his career first Clash checkers.

Jake McBirnie won the Karl Chevrolet Northern SportMod feature Tuesday during the Harris Clash at Deer Creek Speedway. To his left is runner-up Johnathon Logue and to his right is third-place finisher Joe Docekal.

“It worked out pretty good for us at last year’s Clash when we finished third but we did even better this year,” said McBirnie, like Carter a first-time visitor to Spring Valley. “The Clash is a race I’ve always wanted to win. It’s pretty cool to do it, because of the prestige of the race and winning at Deer Creek.”

SPRING VALLEY, MN – April 9, 2013: The frustration continues for many as Mother Nature refuses to cooperate.  Due... read more 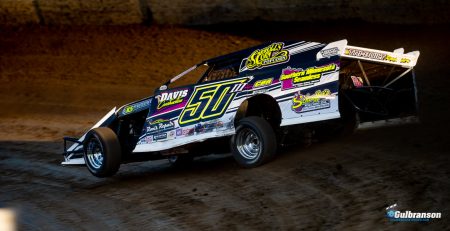 Spring Valley, MN (August 15) By: Todd Narveson After being rained out the week prior, the Deer Creek Speedway roared back... read more

AgStar Financial Services FireCracker at The Creek this Weekend 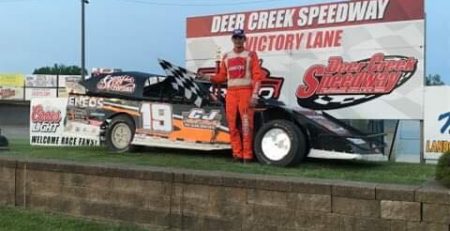 Spring Valley, MN (June 1) By: Todd Narveson It was another beautiful night for racing at Deer Creek Speedway. This week’s... read more

SPRING VALLEY, Minn. -- Over the last couple of years, many people have called Ryan Gustin the best Modified... read more