Spring Valley, MN (July 2):  It was an absolute picture perfect evening for racing at Deer Creek Speedway for the annual Firecracker special. The program was presented by Trom Transport, Pfister Seed, BK Millright, Adams Graphix and Charlie’s Auto Repair. There was also a big fireworks display that followed the program by Flashing Thunder. A season high 121-race cars jammed the pit area and a big crowd turned out to witness the fireworks in the sky and on the track.

There was some unfinished business to take care of from last week’s show and that was to complete the NAPA Auto Care Centers USRA Modified feature that was halted after four laps due to rain. The 25-lap race was picked up at that point and defending track champion Josh Angst led the entire race to win his second feature of the season. Angst then reeled off 30-push-ups to raise money for Join The Journey. Jason Cummins finished second with Jake Timm, Brandon Davis and Keith Foss in the top five.

After all the heat races were completed the WISSOTA Midwest Modifieds rolled on to the track for their 18-lap feature. Twenty-three cars took the green flag with Adam Martinson out front and they fanned out four wide behind him. Don Schaefer zoomed to the lead while Casey Trom advanced up to third. Nick Koehler was on the fly and moved into the top five and quickly jumped to second.

Schaefer was checked out up front while Koehler was some distance behind while Trom and Jared Boumeester had a really good race going for third. The race stayed green and when the leaders got into lapped traffic the race took a dramatic turn. Schaefer came up to put Tyron Friese a lap down but their cars got locked together for just an instant with three laps to go.

That allowed Koehler to close on the leader very fast, but Schaefer was able to get separated and maintained the lead. Schaefer held on for his first Deer Creek Speedway win on his daughter Hadley’s birthday. Koehler finished in second with Boumeester third, Clark Swartz finished fourth and Trom was fifth.

JR Jones took the early lead in the KIK Graphics & Printing WISSOTA Street Stocks with Kyle King and Mike Blowers in tow. Jones would trigger a caution that would involve several cars and forced Blowers out early for the second week in a row. Kyle King assumed the lead with Blake Adams along with Kory Adams close behind. Then Danny Richards made it a four car tussle up front as he challenged the leaders.

The top three ran close and Richards set sail to the lead on lap six. Blake Adams brought out the caution on lap seven and was relegated to the back. Richards took off from there to win his second straight feature. Nick Schwebach raced his way to second with King in third. Kory Adams finished in the fourth spot and Ryan Jacobsen scored his first top five finish in his rookie season.

The Dirt Doctor Trucking USRA B-Mod drivers did a great job this week in their feature race. They have had all sorts of issues in the previous weeks with a lot of yellow flags. Race director Justin Queensland had a special drivers meeting with them before the races and did it ever pay off. Their 18-lap feature went with only one caution flag this week.

JT Wasmund took the lead and was trailed by Andrew Bleess and Nick Wagner. Cole Queenland got to fourth and then to third on lap seven. Kylie Kath charged from ninth and was in the top five on lap nine. Wasmund and Bleess had pulled away a bit, but Queensland reeled them in and Kath moved closed too. The race got the two to go signal when Bleess slid up the track and regained control. Queensland and Kath got together and they spun with the yellow flag waving. Both drivers were knocked from contention and that would set up a wild two-lap dash to the finish.

Wasmund led the field to the green with Shaun Walski now second. Walski made a big move in turn two on the final lap and slid up alongside Wasmund. Wasmund who is just 13-years old was unfazed and powered by Walski to hang on to the lead. Wasmund got to the checkered flag first for his first career win. Walski finished in second with Bleess in third. Kadden Kath and Nick Wagner came home fourth and fifth.

The Olympic Fire Protection WISSOTA Super Stock feature looked for a while like it would be a walk in the park for Brandon Duellman. Duellman took the lead from AJ Hoff on lap two and checked out. On lap five Tommy Richards went around to being out the caution. Duellman still took off and at one point had more than a three second lead on the pack.

Neil Eckhart got to second on lap five and it really did not look like he had anything for the leader. That was until Duellman got held up a bit while he attempted to put some cars a lap down. Eckhart closed the gap to less than two second and then less than a second. With a couple of laps left, Eckhart was less than a half second off of Duellman.

On the final lap Duellman got pinned behind a lapped car and Eckhart gave it everything he had on the top side of the speedway. Eckhart zoomed around the top and drove by Duellman in turn four while the checkered flag waved to steal the win. It was Eckhart’s second win in a row as Duellman would settle for second. Jeff Brauer finished in third with Dustin Nelson and Hoff in the top five.

Brandon Davis would rocket to the lead from row one and lead the entire 25-lap NAPA Auto Care Centers USRA Modified feature. Davis drove away from the pack and dominated for his third win of the season. Josh Angst settled in for second after and early battle with Bob Timm. Lucas Schott picked up a third place finish on the final lap when he passed Timm. Jason Cummins would get his sixth top five finish of the season.
USRA B-Mod 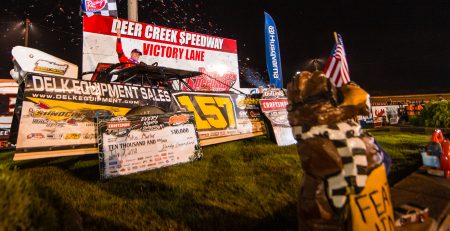 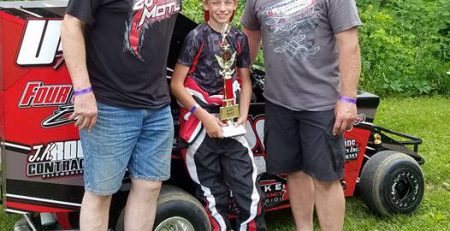 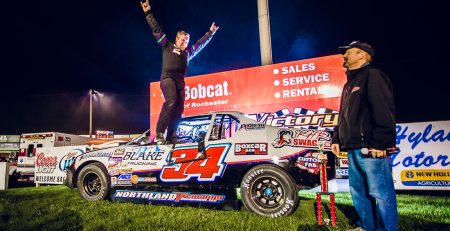 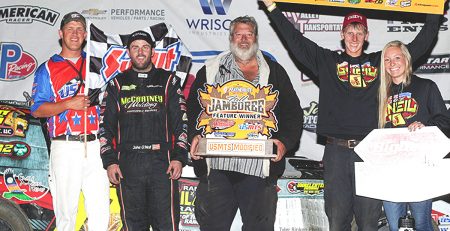 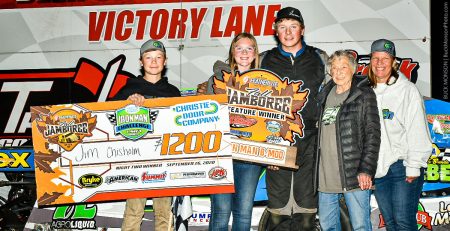