Spring Valley MN – July7, 2014:  (Photos courtesy of Buck Monson Photo)  Happy Fourth of July weekend, racing action resumed without a threat of rain. The crew was busy over the last couple weeks adding some new clay to the surface in preparation for the busy upcoming racing action. A very fast racing surface greeted the fans and drivers.

After a quick blading to settle down the new clay the first feature on the track was the Dirt Doctor Trucking WISSOTA Midwest Modified feature. A four wide race for second going into one was just an indication of the action. Unfortunately turns three and four were not as kind on the start as an eight car incident brought out the first caution without completing lap one. On the restart, Jacob Bleess, Andrew Bleess and Cory Crapser were three wide for the lead. Crapser took the lead at the completion of lap one with Jacob Bleess in second. Mike Mehling took the third spot away from Andrew Bleess on lap two while Jared Boumeester and Josh Crary joined in the battle. Crapser continued to look strong up front but by lap nine got into lapped traffic. Crapser got held up with the first car allowing Bleess to gain ground but then the distance stabilized as they worked through the slower cars. A caution with fourteen down bunched up the field again. Crapser led with Bleess close in second. Crary, Mehling and Andrew Bleess were three wide for fourth again as Boumeester sat in third. A final caution setup a green/white/checker dash to the finish. Crapser led until the white flew over the field. Jacob moved to the high side coming to the white and pulled alongside at the stripe. Bleess continued with the momentum up top and crossed the checkers a car length in front of Crapser. Boumeester, Andrew Bleess and Crary rounded out the top five. Heat races were won by Crary, Crapser and J. Bleess

The SixTwo Graphics WISSOTA Street Stocks had another great race with Troy Voth taking the early lead. Fred Prudoehl sat in second early on with Karl Hewitt Jr., in third. Hewitt Jr. moved into the second spot on lap three while Mike Blowers took over third. Blowers and Hewitt Jr. were side by side on lap five. They caught Voth on lap six and as they battled for the lead. Contact between the three saw Hewitt Jr. going to the tail. On the restart Voth led with Blowers in second and Danny Hanson in third. Blowers took over the top spot on lap seven. Hanson was all over Voth for the second spot as Blowers continued to pull slightly away. With six laps remaining Hanson took over the second spot. Nick Schwebach took over the third spot as Voth’s machine seemed to start slowing. As they came to the white Voth’s machine lost power down the back stretch. Blowers took home the win over Hanson, Schwebach, Kyle King and Noah Grinstead.

The Elma Performance and Fabricating USRA B-Modifieds had another great car count night. After the five heat races and the two B-Feature events the feature event rolled onto the track. Cole Queensland and Alex Williamson raced for the top spot on the start. Williamson held the slight edge while Miah Christenson and Brian Mahlstadt raced for the third spot. A caution on lap four bunched up the field with Cory Crapser making a strong move on the restart to take the second spot away from Queensland. Mahlstadt, Jacob Bleess and Trevor Fecht had a good race going for the fourth spot. Another caution bunched up the field on lap twelve but Williamson had the line on the night and pulled back out front. Queensland held off Crapser while Bleess moved into the fourth spot ahead of Fecht as they ran in this order to the checkers. Heat races were won by Mahlstadt, Queensland, Williamson, Bleess and Fecht. The “B features” were won by Brandon Hare and Kevin Joachim. The win was Williamsons first ever feature win at the speedway.

After Williamson’s first feature win at the speedway the Wagner Trucking WISSOTA Super Stocks put another first time winner into the record books. Matt Olson jumped into the early lead with Harlan Morehart and Dave Solum battling for second. Gary Wiersgalla moved up to make it a three car race on lap two and then took over the second spot. On lap three Jon Duffy took over the third spot with Jeff Brauer working into the fourth spot. With four completed Brauer took over the third spot as Wiersgalla moved past Olson for the top spot. Brauer quickly worked past Olson also to move into second and start to reel in Wiersgalla up front.   Duffy moved into third on lap seven. A caution on lap thirteen bunched the field back up. Wiersgalla led on the restart with Brauer close in second. As the white flew over the field Brauer moved to the outside of Wiersgalla to see if he could get a run. He did down the back stretch and as the exited turn four it was neck and neck to the checkers. At the finish it was Wiersgalla with his first ever feature win by .005 seconds over Brauer. Duffy, Kevin Hager and Olson rounded out the top five. Heat races were won by Duffy and Wiersgalla.

The final race of the night was the NAPA AutoCare USRA Modifieds. Paul Harlestad and Kelly Shryock battled for the lead early on. Lucas Schott quickly joined them up front. An early caution saw Schott move past Shryock for the lead on lap three. Steve Wetzstein sat in third with Jason Cummins and Brandon Davis rounding out the top five. Wetzstein and Shryock made contact on lap nine with Shryock also contacting the outside wall as Wetzstein slowed bringing out the caution. On the restart Schott led with Cummins and Shryock battling for second. Cummins takes over the spot while Brad Waits puts pressure on Shryock for the third spot. Waits took over the spot on lap fourteen while Eric Pember tried to work into the top five by taking the spot away from Brandon Davis. A caution on lap twenty two saw Schott hold onto the lead with Cummins in a close second. Waits sat in third while Davis and Shryock battled for fourth along with Pember. At the finish it was Schott with the win followed by Cummins, Waits, Davis and Shryock. Heat races were won by Shryock, Harlestad, Cummins and Davis.

Racing Action resumes next Saturday with the annual Napa Gopher 50 featuring the World of Outlaw Late Models. The USRA modifieds will be on hand as a support class to this highly anticipated show.

SPRING VALLEY, Minn. -- Hollywood could not have scripted a better finish in the opening feature at the 15th Annual... read more 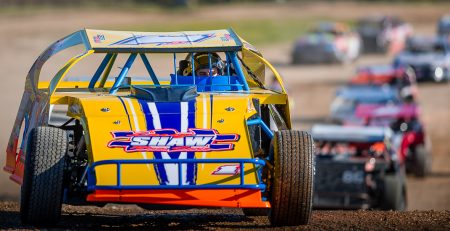