The final night of track points took place a Deer Creek Speedway. Only one battle was still up for grabs in the USRA Modifieds but the race for King Of The Creek was hotly contested. Also, one lucky driver involved with the King Of The Creek program would win a new Polaris four wheeler at intermission. This week’s program was presented by Podein’s Power Equipment, Randy & Sandy Norby and Scott Brown. In addition, a secret contributor stepped up and paid for every driver’s pit pass fee this week.

At intermission the Podein Power Equipment four-wheeler give away took place. Drivers that participated in the National Fleet Graphics King of The Creek program were eligible. Drivers earned passing points during the feature races this season and for each point earned the driver had their name put into the drawing. The Podein family drew the winner and it was USRA B-Mod driver Jim Chisholm who was the lucky winner.

The Dirt Doctor Trucking WISSOTA Midwest Modifieds fired up the feature races first this week with their 18-lap main. Les Duellman took the lead from row one with Kobie Kath and Ryan Goergen close behind. An incident on lap one eliminated track champion Mitch Weiss who was driving Jason Vandekamp’s car this week after the damage he suffered last week to his car.

Duellman took off on the restart, with Goergen going to second. Josh Bazey then challenged Kath for third, but a string of two yellows allowed the race. On the start, Bazey drove to second and Dylan Goettl got to third. Goettl then took second on lap six and then attempted to chase down Duellman.

Goettl took over the lead on lap nine while Jason Vandekamp ran from 15th into the top five. Vandekamp moved to third before a caution came out for a stalled Jacob Toepper. Goettl held the lead with Duellman close. Adam Martinson was on the move from 11th and into the top five.

The laps wound down and Duellman reeled Goettl in. Duellman was running well on the top side of the track while Goettl ran the low groove. Duellman got a couple of good runs and pulled close. The white flag came out and Duellman dove low in turn one. The leaders made some contact and Goettl pulled away.

Goettl took his second win in a row with Duellman second. Martinson made a couple of late race passes to finish third. Vandekamp who was in a different car this week was fourth and Goergen ended up in fifth. Despite being wrecked the week before and eliminated early on this week Mitch Weiss secured his second straight track title.

Bernie Adams took the early lead in the Adams Graphix WISSOTA Street Stock feature. Kory Adams, Braden Brauer and Zach Elward were in a tight pack behind the leader. Bernie Adams night ended on lap three when he coasted to a stop to bring out the caution flag.

That moved Kory Adams to the lead which je would hold to the checkered flag for his second win of the year. The race for second was good with Brauer and Elward when they diced for position. Brauer would take second at the end of the 18-lap race with Elward in third. Danny Richards finished fourth and claimed his first track title at Deer Creek. Nick Schwebach had the drive of the race when he started 15th and charged all the way up to fifth.

Andrew Bleess took the lead from row one, but a quick yellow slowed the race. On the restart Kadden Kath got by Joe Chisholm for second and Michael Wytaske went to third. Brandon Hare was on the move to fourth after he started 10th. Bleess checked out while Kath raced Joe Chisholm again for third with Hare close behind as Wytaske got shuffled back. Jim Chisholm had worked his way from 11th and was up to fifth.

A caution came out on lap 11 and the momentum of the race was halted and things went downhill from there. Yellow flag after yellow flag ensued and at lap 14 the races fifth yellow flag was thrown. For the first time this season the speedways five caution rule was put into place. Five laps were chopped off and since there were less than five laps left it would be a green, white, checkered finish.

Before the fifth yellow, Jim Chisholm had moved to second and would give Bleess a strong challenge on the start. Bleess who ran the extreme high line led Chisholm who worked the low groove to the white flag. Bleess just got over the edge of the cushion in turn two and brushed the wall. Chisholm shot past and scored the win his fifth of the season.

Chisholm also won his third straight track title and with all the passing point he earned in the feature was crowned King Of The Creek also. Bleess ended up in second while Brandon Maitland had an incredible run from 21st to third and earned the hard charger bonus. Kath and Taylor Ausrud rounded out the top five.

Duellman pulled alongside of Brauer and took the lead on lap six. A caution flag came out shortly after, but it did not slow down Duellman. Duellman took off from there and drove to his fourth win of the year. Braden Brauer ended up second while Jeff Brauer got up to third. Eckhart finished in fourth with Dylan Kromschroeder fifth. Kromschroeder had a healthy point lead going into the evening and earned his first track title.

Twenty-six cars took the green for the Napa Auto Care Centers USRA Modified feature. Jason Cummins held a two-point advantage over Brandon Davis in the race for the track title. Basically, who ever finished ahead of the other would win the title. Pole sitter Darwyn Karau led the field into turn one, but Davis who started third darted to the inside and took the lead in turn two,

Joel Alberts challenged Karau for second with Jacob Bleess close behind. Alberts drove past Karau for second and Bleees came along behind him for third. Jason Cummins then chased down Karau to take fourth on lap three. A caution slowed the race and things changed a bit on the start.

Davis led but Bleess shot to second while Alberts and Cummins went at it for third. Three more cautions on laps five and six kept things at a snails pace for a bit. Davis took off on the start, but things heated up behind him. Bleess, Alberts and Cummins had a good race for second and Alberts again took that position away.

Dustin Sorensen who started 11th and Lucas Schott who started 12th were on the move and into the top five on lap nine. Davis had checked out up front and left a good battle for second to take place. Bleess moved back to second and Schott was up to third as the leaders moved through lapped traffic. Davis continued to stretch the lead when he drove through the back of the pack.

Davis crossed the finish line first for his fifth win of the season and recorded his fifth track title. Schott passed Bleess in lapped traffic on lap 21 to take second. Bleess finished in third with Alberts in fourth and Sorensen rounded out the top five. 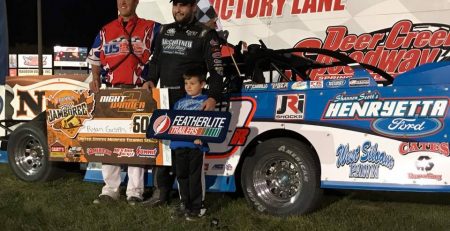 Ryan Gustin was in a grim mood after Thursday night’s main event at the Deer Creek Speedway, but Friday... read more 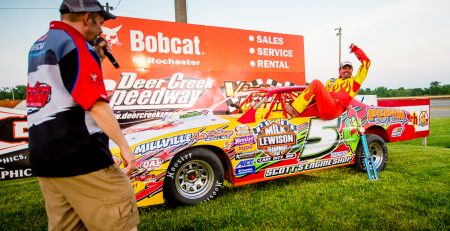