Spring Valley, MN (May 21) – By: Todd Narveson:  After almost wintry conditions cancelled racing last weekend, the weather was spectacular for Jones True Value night at Deer Creek Speedway. A season high 117 race cars signed in the back gate and four drivers got the broom out with clean sweeps when they won both their heat race and feature event.

The WISSOTA Polydome Dirt Track Series Midwest Modifieds were on the track first for their 18-lap feature race. Ron Jablonske and Billy Steinberg brought the 17-car field to the green flag. Steinberg would lead early on while Don Schaefer worked to second. Jablonske and Tony Schill got alongside Schaefer and they were three abreast behind Steinberg. Robbie Franklin ran the top shelf and worked his way into the top five from row four.

Schaefer got back to second as Schill was now third with Franklin right on him. Another car fans kept their eyes on was Dan Wheeler. Wheeler started 16th and cracked the top five on lap six. Schaefer challenged and then took the lead from Steinberg on lap six and Franklin zoomed by Schill and then Steinberg for second.

Both Schaefer and Franklin ran the extreme high groove right up on the wall while the laps continued to click off. The lead duo closed in on the back of the field with a couple of laps left. Schaefer went to the low side to pass the slower car and slid up the track in turn four on lap 15. Franklin’s car stuck to the bottom and he stole the lead away.

Franklin would cruise from there to score his second win of the season. Schaefer ended up in second place with Schill in third. Wheeler’s solid charge found him fourth at the checkered flag and Steinberg finished fifth.

Another solid field of 20-KIK Graphics & Printing WISSOTA Street Stocks got ready for their 18-lap feature with Mike Chisholm and Zach Elward in row one. Elward jumped to the lead with Durand Peterson vlose behind. Chisholm would spin on lap two and triggered a caution. On the restart Mike Blowers challenged Peterson for second and Kyle King raced Kory Adam for fourth.

King then snuck up and made it three wide with Blowers and Peterson for second. A yellow on lap six would slow the pace and set up a torrid restart up front. Blowers charged to the inside of Elward and snagged the lead and King followed along to second. Danny Richards made things interesting late in the race with a top side run into the top five.

Blowers drove on for the clean sweep and his second win of the season for his 23rd-career win which ties him for second in Street Stock wins with Travis Krause. King finished a strong second and Richards’ charge took him to third. Peterson finished in the fourth spot and Elward was fifth.

The Dirt Doctor Trucking USRA B-Mods ran five heats and two b-mains to whittle a 39-car field to the 26-car field that started the feature. Miah Christensen took the lead with polesitter Dustin Kruse in second. There would be a yellow on lap four for a four car incident. On the restart a big melee took place in turn one that completely blocked the track and brought out the red flag.

Christensen was solid up front through the race and Kylie Kath got to second with Jim Chisholm and Cole Queensland behind them. Then on lap 12 all heck broke loose on the backstretch into turn three. The pack behind the core lead group was in a tight pack. One car bounced off the wall and a violent crash ensued. At least eight cars were involved and several with heavily damaged. A 25-minute red flag period was in effect to clean up the crash scene.

When the race started again there was a pile-up on the start which involved another eight cars in turn four. The race did eventually get back under green and Christensen earned his first win and the sweep at Deer Creek after several years of racing here. Queensland would finish in second with Kath in third. Jon VanMinsel was fourth and Alex Williamson rounded out the top five.

After the marathon USRA B-Mod main the Olympic Fire Protection WISSOTA Super Stocks came out and went 20-laps caution free. Schatney Sanders led early on but Kevin Hager took the lead away on lap four. Seventh starter Jeff Brauer was third on lap four a reeled in the leaders.

Brauer drove to the inside of Hager and Sanders and they were three wide for the lead. Brauer secured the lead on lap six and scooted away for the clean sweep and his second win of the season and 49th career win which moved him past Mark Teske for third in total all-time wins at the speedway. Danny Richards made a late race charge to second with Hager, Neil Eckhart and Sanders in the top five.

A huge field of 31-NAPA Auto Care Centers USRA Modifieds raced their way into the 26-car starting field for their $1000 to win 25-lap main event. Levi Nielsen and Keith Foss led the pack to the green flag. Foss and Steve Wetzstein battled for the lead but a quick yellow slowed things down. The green flag came out and we were three wide up front with Foss, Wetzstein and Jake Timm.

Timm stole the lead on lap four, but Foss came right back on the top of the track to challenge. They went door-to-door on laps five through seven. Josh Angst got by Wetzstein for third and Lucas Schott cracked the top five after he started in row six. Jason Cummins came alive on the cushion and he moved to fourth.

Timm and Foss had a terrific race up front still side-by-side and they swapped the lead a couple of times. Foss led lap 11, but Timm returned the favor to steal it back on lap 12. Behind them Schott chugged along on the low side and snuck to the inside of Cummins for fourth. Timm and Foss were again alongside each other bur behind them Schott scooted past Cummins and Angst to take third.

While Timm and Foss battled for the lead, Schott quickly closed and shot past Foss for second on lap 20. Schott continued to charge and drove to the inside of Timm for the lead on lap 21. Schott blew by and took his second win of the year and the sweep also. Timm ended up second and Cummins snuck past Foss for third on the final lap with Brandon Davis fifth. 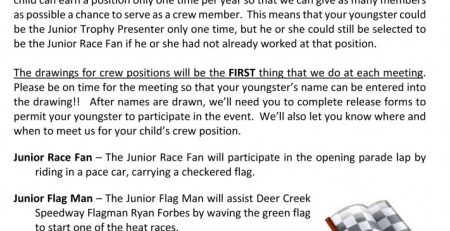 SPRING VALLEY, MN - May 3, 2015:  Deer Creek Speedway roared back into action this weekend after a cancellation... read more

Race Monitor gives racers and spectators alike, the ability to view live timing and scoring during every event at... read more

SPRING VALLEY, Minn.—On Thursday, Friday and Saturday, July 23-25, the Best of the Best dirt modified drivers on the... read more 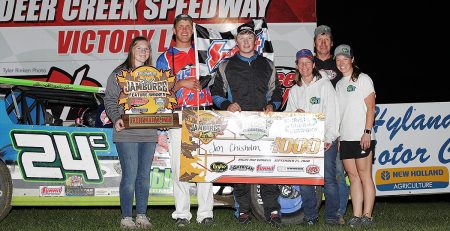 September 25, 2020  |  by Jeff Nun, USRARacing.com Jim Chisholm’s sixth win of the season at the Deer Creek Speedway was his biggest... read more

SPRING VALLEY, Minn.—Jared Boumeester of Ellendale, Minn., took the lead from Erik Kanz on lap 7, and then drove... read more

Ride along with Mark Noble in his #74 USRA Modified during his feature event at Deer Creek Speedway in... read more