The Senior feature race had the veteran slingshot driver of Evan Reyna driving the 77 car of Hunter Kennedy on pole with the 28jr of Devin Born on the outside. 2nd row inside was the 20 of Gage Motl with the 25 of Joe Chisholm on the outside. Inside 3rd row had the 29 of Lily Reps. Reyna eager to prove he still had the slingshot talent, pulled ahead of Born on the start, but in turn 1, Motl found himself connecting with the right rear tire of Born to bring out the caution. With Motl put to the back, Reyna again pulled out away from Born on the restart, but this time it was the 29 of Reps and the 25 of Chisholm getting tangled in turn 2. Both managed to regain control without a caution, and Motl slid around to take over 3rd place. Reps and Chisholm continued to battle for position, but it was Reyna who continued to dominate this 18 lap feature race and take home his first ever Senior Slingshot feature win. The 28jr of Born finished 2nd, Motl 3rd, Reps 4th, and Chisholm 5th.

The Junior feature was scheduled to be under the lights during intermission, but a rain delay forced the race to be postponed until Saturday, August 12.

Heat race winners include the 7C and the 78J in the Pee Wee class, the K34 in the Junior class, and the 20 of Motl in the Senior class.

Season Opener Snowed Out, First Time in History of Facility 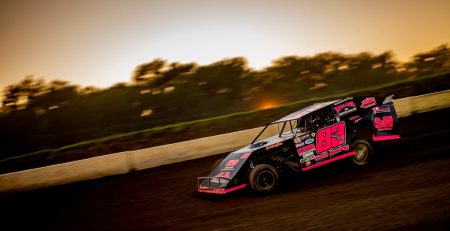