SPRING VALLEY, MN – July 21, 2012:  (Photo Courtsey of Buck Monson Photo)  It was Mascot Night at Deer Creek Speedway with area schools on hand with their Mascot. Local businesses, silent auction, Admission tickets and raffle tickets were sold with each school taking home the proceeds. A final tally was not present at this time but all schools took home over $700 each with some taking home over $1000 for their sale of tickets and donations. A huge thank you to the local businesses who donated money for the schools, with over $3500 in donations coming into the speedway on the night.

The Dirt Doctor Trucking WISSOTA Midwest Modifieds were up first on Essig Insurance and L&D Ag night at the speedway. Bill Stettner jumped out to the early lead with Cory Crapser, Jared Boumeester and Tim Myhre three wide for second.   Boumeester took over second then pulled alongside of Stettner for the lead on lap two. Boumeester took over the top spot with Crapser following through and challenging for the lead on lap three. Crapser took the lead on lap four with a caution flying on lap five bunching the field back up. On the restart Dustin Scott took over the third spot and started to pressure Boumeester for the second spot. With thirteen down Scott took over the second spot as another caution flew over the speedway. Crapser led on the restart with Scott in second. Bryan Hernandez cracked into the top five. Scott threw everything he could at Crapser the last couple laps but was unable to make a pass for the lead. Crapser came home with his seventh win of the season at the speedway. Crapser and Scott won the heat races earlier.

The Cap N Cork WISSOTA Street Stocks rocked the house early in their feature with Derek Ludington taking the early lead. Tory Voth and Nick Schwebach were side by side for second with Kory Adams right behind them. On lap two the three went three wide for second and then Voth moved up to race with Ludington for the lead. With three down Voth, Ludington and Schwebach were three wide for the lead while on their bumper Adams, Shaun Mann and Mike Blowers were three wide for fourth. These six cars put on a show for the fan as the ran around the speedway for the next lap in formation with Voth taking control of the lead while Mann moved up to second. On lap five Mann moved past Voth for the lead while Ludington and Blowers raced for third. Mann took over the lead on lap seven with Blowers moving into third on the next lap. Mann held on for the win with Voth in second and Blowers in third as the checkers flew. Mann and Fred Prudoehl won the heat races.

With thirty cars in the pit area the Hinz Trucking USRA B-Modifieds took to the speedway for their feature event. Parker Hale jumped out front early with Jason Schlangen in second. Ben Moudry sat in third early. Jacob Bleess worked into fourth on lap three. A caution on lap eight bunched the field up with Hale leading. Schlangen and Moudry battled for the second spot with Schlangen holding the slight edge. The two battled for the spot and on lap thirteen had pulled up to Hale and raced three wide for the lead. Schlangen took the lead as Hale pushed up the speedway. Bleess turned up the wick over the last few circuits taking second away from Moudry on lap fifteen. Bleess pulled alongside of Schlangen on the last lap and as they raced out of four to the checkers Schlangen had the momentum line and took home the win for his first victory at the speedway. Jerry Young won the B feature with Schlangen, Kylie Kath, Erik Kanz and Hale taking home heat race action.

The Wagner Trucking WISSOTA Super Stocks were up next with Ed Sanders taking the early lead. Ryan Siegle sat in second with Dave Solum in third. With four complete Jeff Brauer had worked into the second spot with Kelly Anderson in fourth. With five down Anderson and Kevin Hager raced for the third spot. Brauer moved under Sanders for the lead on lap eight while Darrel Hazelton moved into the top five. On the next lap Anderson took over the second spot. The top two then started to pull away from the field. On lap thirteen Brauer bobbled slightly allowing for Anderson to take over the lead. Anderson would hold the lead to the checkers with Brauer and Hager in the top three. Sanders and Anderson took home heat wins.

Justin Sass jumped out front in the Altenburg Construction WISSOTA Late Models with Dennis Hillson in second. Jerry Bloom moved under Hillson on lap three to take over second with Jake Redetzke following through into third. On lap four Redetzke took over the second spot and set sail from Sass out front. With seven down Sass and Redetzke were side by side for the lead. Redetzke took over the point while Mike Prochnow moved into fifth. Nick Herrick moved past Sass for second on lap eleven while Prochnow then worked into the fourth spot with Lance Matthees in fifth. Prochnow moved into third on lap fifteen as Redetzke worked through slower cars up front. At the finish it was Redetzke with the win. Prochnow, Hillson and Sass won heat races earlier in the night.

Brandon Davis jumped out front from the pole position on the start of the NAPA AutoCare USRA Modifieds. Mark Teske ran close in second with Brandon Hare and Jason Cummins racing for third. With four down Cummins now in third started to pressure Teske for the second spot. A restart on lap four saw Cummins take over second. Lucas Schott and Hare raced for third while Bob Timm worked into fifth. Another caution on lap seven saw Davis leading with Schott moving into second. Tommy Myer worked into the top five. As the laps clicked off Cummins retook the second spot on lap nine. Davis took home the win followed by Cummins and Schott. Josh Angst won the “B-Feature” while Dan Bohr, Mark Teske, Cole Queensland and Schott won the head races

Evan Reyna took the lead in the PeeWee slingshot division of Button Buck Speedway. Karlie Wagner lead lap two until sliding of the track midway in the feature. On the restart Reyna regained control and took home the win.

In the junior division it was Keagen Einck out front with Jim Chisholm and Jett Sorensen racing for second. Einck took home the win during the evening feature activities.

In the senior division Derek Clement lead flag to flag to hold off a hard charging Dan Olson in second.

Racing action resumes next week with the Hanson Tire World Modified Dirt Track Championship. Racing action will begin on Wed at 6:30 and conclude Saturday night with the $25,000 to win finale. 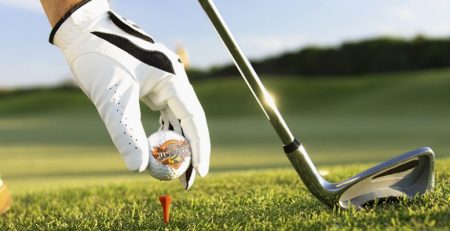 From the speedway to the fairway: racers tees off Friday morning at Featherlite Fall Jamboree 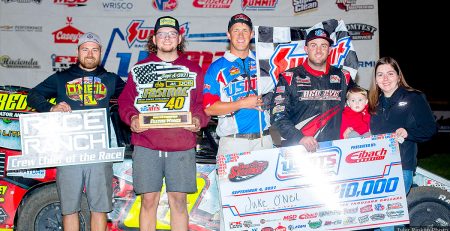 Jake O’Neil’s mastery of the Deer Creek Speedway continued Saturday as he captured the J&S JCB Fastrac 40 in... read more 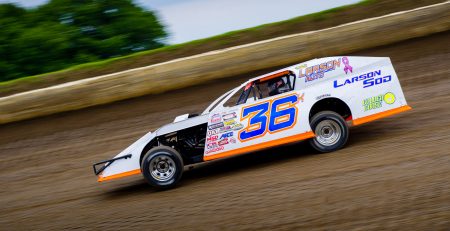