The Adams Graphix WISSOTA Street Stocks were one of the divisions that competed at the J&S-JCB Labor Day Duel at Deer Creek Speedway. While a smaller than anticipated field of racers came out for the show, they put on a fantastic feature race.

The ten cars ran two heat races in which Kory Adams and Kylie Kath took the wins. Kath a WISSOTA Midwest Modified driver was offered a ride in his brother-in-law Zach Elward’s car for the night. Kath would make the most of that opportunity.

After the redraw Ryan Jacobsen and A.J. Zvorak sat in row one for the 18-lap main event. Jacobsen took the lead with Nick Schwebach and Zvorak close behind. Zvorak got to second and then passed Jacobsen for the lead on lap four. Braden Brauer moved to fourth and the top six were close.

Jacobsen and Schwebach battled for second right behind Zvorak on lap six. Kylie Kath darted to third on lap eight and then it was Jacobsen and Brauer going at it for fourth. Zvorak led, but Schwebach challenged with Kath close on lap 10. Zvorak ran the top groove while Schwebach was low when they were even for the lead on lap 13 with Kath close.

Kath ran down the middle of the speedway and stuck it in three wide with Schwebach and Zvorak on lap 15. Schwebach was scored the leader on lap 15, but again the trio went three abreast for the lead on lap 16. Schwebach and Kath cleared themselves from Zvorak and were door-to-door for the lead as the white flag was set to wave.

Kath slipped past and led the final circuit for the exciting win and his first in a Street Stock. Schwebach came home in second while Zvorak was third. Jason Newkirk came up to finish in the fourth position and Brauer would round out the top five.

The NAPA Auto Parts Gopher 50 is just around the corner!  The LARGEST paying Late Model race of the year... read more

Scott on fire Friday, on the pole Saturday at #WMDTC 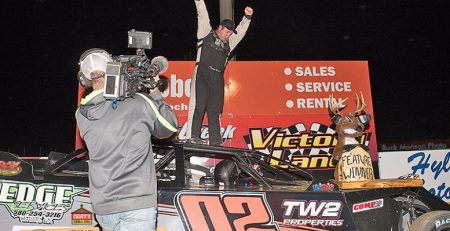 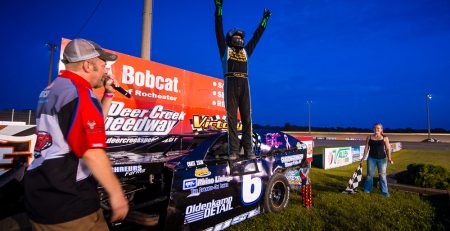