For completing the 100-lap distance faster than the other drivers in the field, he was rewarded with $20,000 and the champion’s trophy at the 3rd Annual World Modified Dirt Track Championship presented by Bauer Built Tire and Hanson Tire Service.

Since winning Wednesday’s main event qualifier, Hughes had two days to relax, watch the other preliminary events and strategize how he would handle the extended race distance, fuel mileage, changing track conditions and 30 fellow racers representing the world’s Best of the Best in dirt modified racing.

The one thing he didn’t factor in was rain, but even Mother Nature wasn’t able to throw a wrench into his plans.

Saturday night’s main event on the high-banked 3/8-mile clay oval launched with a three-wide start that saw Jason Krohn squirt out from the middle of the front row to take command right away. 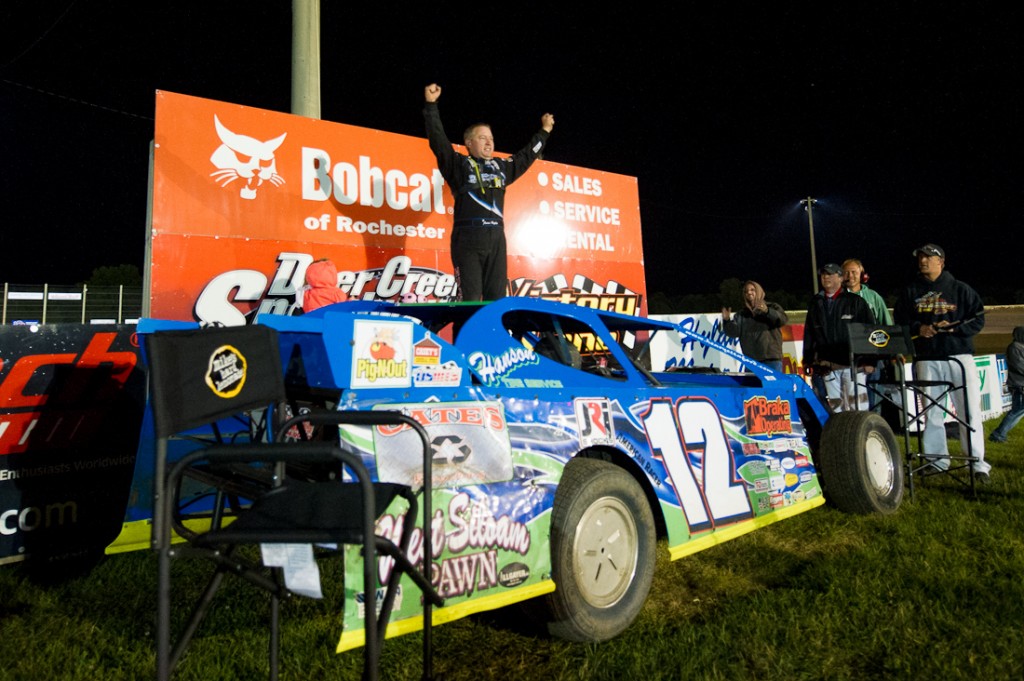 The 2007 USMTS national champion took to the high side of the racing surface and set a blistering pace while Terry Phillips, Stormy Scott and Lucas Schott tried to keep pace. By lap 10, however, Krohn’s advantage was ten car lengths while Hughes made his way up to third.

Krohn encountered lapped cars soon thereafter and contact with slower traffic nearly ended his run. Instead, he continued to scream around the top side of the track with the bent and twisted sheet metal on the right side of his body not appearing to slow him down.

With 18 laps in the books, a light rain began to fall just as the yellow flag appeared for Keith Foss’ spun machine. This gave Krohn a clear track in front of him but also put Hughes on his rear bumper for the restart.

Back under green, the drivers tip-toed around the slippery surface for a couple of laps before the track began to dry off but another caution three laps later put the remaining 79 laps in question as sprinkles continued to dot the racing surface.

Luckily, the wet stuff subsided and the on-track action got back underway with Krohn and Hughes waging a fierce battle for the lead. While Hughes was able to show Krohn the nose of his mount, Krohn was able to shut him down and keep the top spot at the flagstand.

Another caution briefly slowed the pace with 28 laps complete. This time Hughes was  finally able to inch ahead of Krohn and secured the lead as they wrapped up the 30 circuit.

From there, Hughes pulled out to a commanding advantage while Krohn sat solidly in second ahead of Phillips, Jason Cummins and Brandon Davis. Behind them were Scott, Tommy Myer, Jon Tesch, Ryan Gustin and Rodney Sanders-all looking for a faster way around the racetrack.

Krohn closed up behind Hughes again with 39 laps down and the night came to an end for Davis on lap 40 when broken gears in his quick change rear end sent him to the infield.

As the laps ticked off, Hughes continued to find the fastest way around while Krohn remained within striking distance. After battling with Krohn for several laps, Scott made his way around and into the second spot with just ten laps to go.

But Hughes’ trip to victory lane was delayed on the 93rd lap when Tesch’s modified came to a stop in turn 4 to bring out the race’s final caution with seven laps to go.

Scott tried his luck on the low side of the racing surface, but was never able to rattle Hughes who drove to his biggest payday in his USMTS career.

“We had a really good car all weekend; Steve (Karver, crew chief) had this thing dialed in and we were pretty comfortable out there,” Hughes said following his seventh USMTS win at Deer Creek, “I didn’t want to see that caution at the end. I hadn’t seen anybody until then so I figured we were running pretty good.”

Scott, who debuted a new GRT Chassis this weekend with Eagle Motorsports, gave the team their first USMTS win in preliminary action Friday night but wound up one spot short in Saturday’s finale.

“I guess you have to be happy with a second against this level of competition, but we really felt like we had something going in,” the race’s polesitter said. “I didn’t really have anything for Hughes at the end unless he screwed up, and he doesn’t screw up.”

Joey Jensen, who finished second to Gustin and one spot ahead of Hughes in last year’s WMDTC, came to life late in the race and used the final restart to take third away from Krohn. Krohn’s racing teammate, Rodney Sanders, finished behind him in fifth.

Phillips held on for a sixth-place finish, Zack VanderBeek raced from 19th to get seventh, Jason Cummins held on for eighth and defending event winner Gustin was ninth.

Johnny Scott played the “alphabet soup” game Saturday. He finished second in the “C” Main, then earned the 12th and final transfer spot from the “B” Main to get the 29th starting spot in the 100-lap main event. He finished tenth and earned a $1,000 bonus from Red Tail Bait & Tackle for being the race’s hard charger.

Next on the agenda for the United States Modified Touring Series is a Friday, Aug. 2, date at the Batesville Motor Speedway to kick off the Hunt for the USMTS Casey’s Cup. The second round takes place Saturday at the West Plains Motor Speedway and the Monett Speedway hosts the tireless USMTS touring titans on Sunday, Aug. 4.

Note: #90 Wetzstein was scheduled to start 18th but elected to start 31st. All starters from 19th back moved up one spot accordingly.

The Countdown to the USAC AMSOIL Sprint Car National Championship has begun!

For the first time since 1988, the “Thunder & Lightning” of the USAC AMSOIL Sprint Car National Championship treks... read more 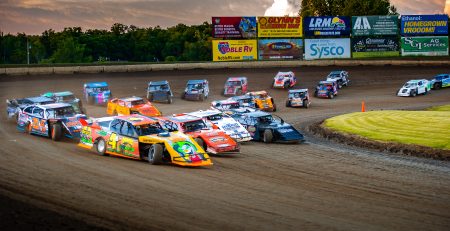 Ride along with Richie Gustin in his #0 USMTS Modified for "C" Main race at Deer Creek Speedway in... read more 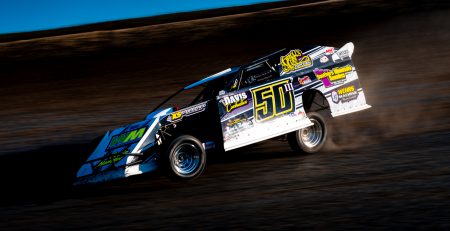 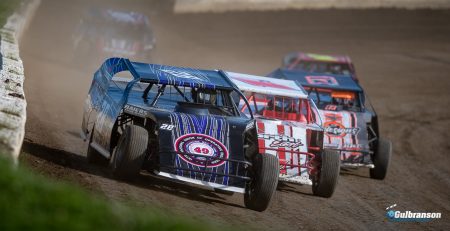