The Deer Creek Speedway in Spring Valley, MN has released the schedule of events for the 2020 race season. This year will mark the 25th anniversary of the track and will be the 19th year with the Queensland family at the helm. Fans have become accustomed to the facility being hosts to big events. That will not change in 2020 along with the stout weekly program.

The season preview will once again kick off on Saturday, April 4. This always gives fans a look at the new cars for the upcoming season and usually draws a great crowd. The show hours will be from 10:00 a.m. to 2:00 p.m.

There will be an open practice session held on Saturday, April 18 to give the drivers to test out their machinery before the season starts. The first night of racing is scheduled for April 25 at 6:00 p.m. The line-up will remain the same with USRA Modifieds, USRA B-Mods, WISSOTA Street Stocks, WISSOTA Super Stocks and WISSOTA Street Stocks featured on the program. There will be two more point night programs on May 2 & 9.

On Saturday, May 16; the North Star Nationals will feature the Lucas Oil Late Model Series that will bring some of the nation’s top Super Late Models to the high banks of the Creek for the second time. Then on Memorial Day weekend, Saturday, May 23, race fans will look on as the nation’s top Modified drivers compete. The United States Modified Touring Series (USMTS) will tackle the facility for the Southern Minnesota Spring Challenge. Another point show will end the month of May on May 30.

June will start with a point race for all five classes on June 6. On June 13, the school bus races will invade the track along with mascot night. The bus races always entertain with their crazy antics along with the full five class program. The annual “Pink-Out” event returns on June 20 with Join-The-Journey to raise awareness and money in the fight against breast cancer. On June 27 there will be another point night that features all five divisions.

The month of July starts off with a literal bang. We celebrate our nation’s independence on July 4 with the annual fireworks show that takes place after the races. The next event will be the 41st Annual Gopher 50 with some big changes for the event this year.

The summer classic moves back to a weekday event for 2020. This year’s edition of this racing tradition will be held on Thursday, July 9. Another big change will see the Lucas Oil Late Model Series as the featured attraction. This will be the first time the Gopher 50 will be run with Lucas Oil sanction. The USRA Modifieds will also be on the program so get your tickets early for this epic event.

Saturday, July 11 will feature another five division point night of racing action. Then expect another huge crowd on July 18 when “Tasseldega Nights” returns. The night is to educate the fans on the corn growers and the ethanol industry presented by the corn growers of southeastern Minnesota. The benefit for anyone that attends is admittance to the speedway is free that evening.

The month ends on the 25th with the 5th Annual Driver Recognition Night. The afternoon and night is meant to recognize the drivers and pioneers from our sport’s history. There will also be several vintage race cars on display that day. All five classes will be in action that evening as well.

August will feature the final nights for track points and the battles heat up for track championships with Saturday, August 1 the first of those. Then Tuesday, August 4 the speedway will again host the Harris Clash for IMCA Modifieds and Sport Mods. This is another one of those “must-see” shows with huge car counts and amazing racing.

Racing on August 8th will have the added spice of being a Race of Champions Qualifier night for the WISSOTA sanctioned classes. Feature winners that night in the Super Stocks, Midwest Modifieds and Street Stocks will be qualified for the R.O.C. race held at the WISSOTA 100 in the month of September. Veteran’s night will return for the fourth consecutive year on August 15.

The pressure of the points chase continues on August 22 with another night of valuable track points up for grabs for all five divisions. Season Championship Night is August 29 and it is the final chance to accumulate track points and claim a track championship. Then attention gets turned to a big month of September.

The month fires up with the Labor Day Duel on September 5. The USMTS Modifieds will be on hand along with the Iron Man Stock Cars, USRA B-Mods and WISSOTA Street Stocks.  On Saturday, September 19, the 2nd Annual Stock Car Nationals for USRA Stock Cars and USRA Hobby Stocks will take place. Last year’s show was fabulous with great car counts and some very intense racing. Look for more of the same when this event will continue to grow.

The season will come to an end with the running of the 22nd Annual Featherlite Fall Jamboree which is one of the most prestigious Modified events in the nation. The week kicks off on Wednesday, September 23 with an open practice session. Then the Modifieds will race on Thursday and Friday with two, $5000 to win shows. On Saturday it is another complete program with a cool $10,000 on the line for the Modifieds. The USRA B-Mods will bring a big field of cars to race three complete shows in the three nights of modified mayhem.

Tickets for 2020 events will go on sale Monday, December 16th at 9am. Fans that had reserved seats for the 2019 Gopher 50 will have until Thursday, January 2nd to renew their seats for the 2020 event. After that date those seats will be up for grabs.

The Deer Creek Speedway is a high-banked 3/8-mile clay oval which sits on 60 acres just 15-miles south of Rochester, MN with one of America’s most popular state-of-the-art racing complexes and an adjoining campground. For more information on the schedule or tickets for upcoming events go online at www.deercreekspeedway.com or by calling the track office at 1-800-DCS-RACE. Make sure to like our Facebook page, follow the speedway on Twitter or check out the YouTube channel that features video action from the speedway. 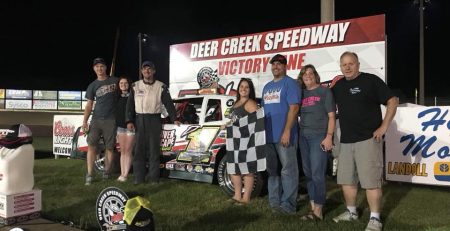 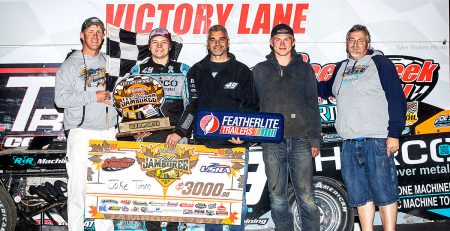 Race into the season with our SpeedWeeks Specials! 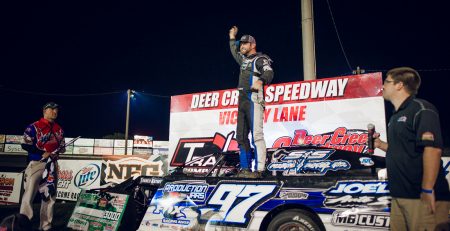 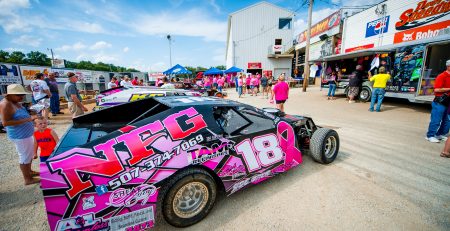 Pink Out at Deer Creek Speedway