Spring Valley MN – August 15, 20015:  (Photos courtesy of Buck Monson Photo)  Casey Trom Led at the drop of the green in the Dirt Doctor Trucking WISSOTA Midwest Modified feature event while they were three wide behind her.  With three laps completed Jared Boumeester and Trom were battling for the lead.  Boumeester took over the control on lap four.  Dustin Scott started to work through the pack after starting at the rear of the field and by lap 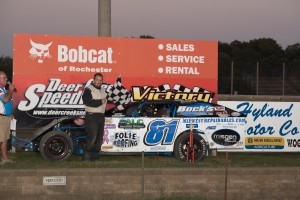 seven had worked into the top five.  Don Schaefer sat in second but was unable to make up any ground to the leader while Garitt Wytaske and Scott battled for the third spot.  At the finish it was Boumeester with the win by a big margin over Schaefer, Wytaske, Scott and Ryan Wetzstein.  Heat races were won by Ryan Goergen, Josh Crary and Wytaske.

Danny Hanson got the jump on the field at the drop of the green on his way to the win but it was not an easy win.  Early on Troy Voth kept the pressure on until Nick Schwebach started to battle with Voth for second.    Schwebach took over the second spot until he lost the handle of his machine to bring out the first caution of the

event.  On the restart Hanson led with Mike Blowers and Bernie Adams battling for second and pressuring Hanson up front.  Blowers took over second and started working low on Hanson.  Hanson was too strong up front as they raced side by side for most of the rest of the feature with Hanson holding a slight edge everytime they crossed the line.  At the finish it was Hanson with the win, Blowers, Kory Adams, Richards and Schwebach in the top five.  Heat races were won by Richards and Bernie Adams

Kylie Kath and Shaun Walski battled early for the lead in the Wagner Trucking USRA B-Modified division.  Walski took the point while Cole Queensland and Brandon Hare battled for a top five finish,  Kyle Anderson looked strong as he worked into second at the midway point after battling with Scott Demmer early on.  Erik Kanz found the top side to his liking and on made a strong run from outside the five in the later stages of the race to work inside the top five. 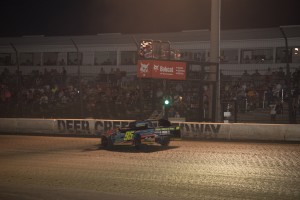 At the finish it was Walski with the win, Anderson held off Kanz to finish second while Demmer and Queensland rounded out the top five.  Blake Arndt and Dustin Kruse took home B-Feature wins while Trevor Fecht, Kanz, Walski, and Hare took home the hear race wins.

Brandon Duellman jumped out to the early lead in the WISSOTA Super Stock feature event with Neil Eckhart in second early on.  With three down Tommy Richards took  over the second spot with Jeff Brauer quickly working into the third spot.  Brian Fetting and Adam Stockhausen battled 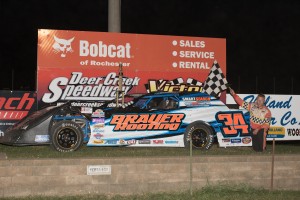 for the fifth spot early on.  With six completed Brauer worked under Richards for the second spot and then moved past Duellman to lead lap nine.  Richards worked past Duellman for the second spot on lap eleven but Brauer was strong on the bottom tonight.  At the finish it was Brauer taking home the win, Richards, Stockhausen, Eckhart and Duellman rounding out the top five.  Heat races were won by Eckhart and Richards

By the time the Napa AutoCare USRA Modifieds took to the track it was black and slick from top to bottom which is a Brad Waits type of track.  Mr. Waits took the lead out of turn two on the opening lap with Jacob Bleess sitting in the second spot.    Joe Horgdal ran in third early on with Josh Angst pressuring him for the spot.    Angst took the spot while  Jason Cummins and Brandon Davis had the best battle on the track.  By lap ten the duo soon joined Horgdal to race three 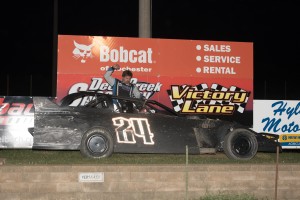 wide for the third spot.  Davis took over the spot and then set sail for the front of the field.  Davis worked past Angst for third on lap twenty and then moved past Bleess for the second spot as the white flew over the field.  Waits had almost a half lap lead on the field as it ran caution free for the twenty five lap feature event.  Heat races were won by Waits, Bleess and Cummins won the heat races.

Racing action resumes next Saturday at 6:00 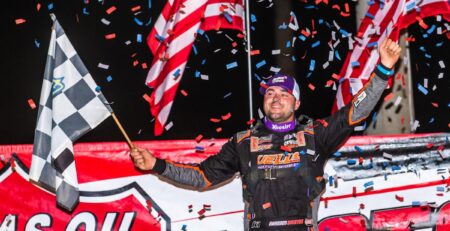 Ride along with Josh Angst in his #99 USRA Modified during his heat race at Deer Creek Speedway in... read more

Ride along with Adam Penn #5* in his #99 USMTS/USRA Modified during his heat race at Deer Creek Speedway... read more 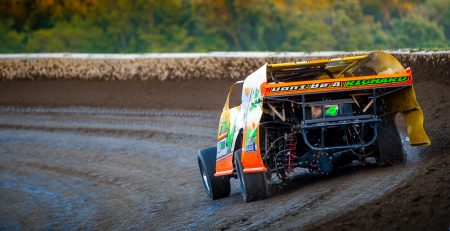