SPRING VALLEY, MN – May 3, 2014:  (Photo Courtesy of Gulbranson Photo) After a long cold winter, and a week of rain that dumped 3″ on the speedway Deer Creek finally held their opener on Saturday night. The new racing surface that was applied last fall was in very good shape for the amount of moisture received during the week.

The first feature of the night saw the Six Two Graphics WISSOTA Street Stocks pull onto the speedway with twenty cars on hand to do battle. Tim Johnson made the long pull down from Brainerd to show the field the way around the track. Nick Schwebach 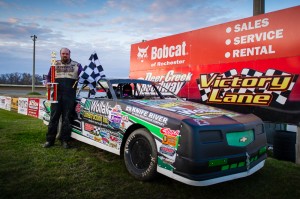 held onto second early on while Mike Blowers sat in third. Noah Grinstead looked strong early on pressuring Blowers for the third spot while Jim Gullikson sat in fifth. With five down Gullikson moved past Grinstead for the fourth spot. On lap seven Gullikson moved past Blowers for the third spot. The race continued to string out without a caution and on lap fifteen Gullikson moved past Schwebach for the second spot. Johnson was over a full straight away ahead of the second place battle by this time. Johnson cruised home with the win, Gullikson, Schwebach, Blowers and Kory Adams rounded out the top five. Danny Hanson, Kory Adams and Mike Blowers too home heat race wins. 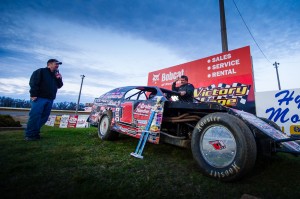 Next up the Dirt Doctor Trucking WISSOTA Midwest Modifieds took to the track with Ashley Mehrwerth jumping into the early lead. Dan Wheeler, Chad Fouquette, Jared Boumeester, Tony Schill and Dustin Scott were in a tight battle for the third spot as Jason Vandekamp pulled up to make it a six car battle. With three down Wheeler started to pressure Mehrwerth for the lead. Wheeler took the lead on lap and the first caution of the event flew on lap six. On the restart Wheeler leads with Schill taking over the second spot. Dustin Scott could now be found in third with Boumeester and Vandekamp racing for fourth. Jacob Bleess sat behind the battle as another caution flew. On the restart Wheeler jumped out front with Scott following into second. Bleess and Vandekamp now swapped spots in the corners as they raced for fourth behind Schill. Vandekamp eventually held onto the fourth spot and with sixteen completed moved under Schill to take over the third spot as they raced to the finish. At the line it was Wheeler with the win, Scott, Vandekamp, Schill and Bleess rounding out the top five. A great field of 30 cars was on hand in the division with Cory Crapser taking home the B-Feature while Bleess, Schill, Scott and Boumeester took home the heat race wins. If you plan on trying to fix up your car and put it in shows read this helpful review on the best parts to get. 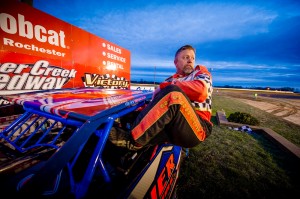 Jeff Brauer quickly pulled away from fellow front row starter Gary Wiersgalla in the Wagner Trucking WISSOTA Super Stocks and never looked back. Tim Johnson and Dan Gullikson battle early in the feature for third until Johnson took control of the spot. Johnson moved under Wiersgalla for second on lap three but was unable to close much distance up on Brauer up front. Gullikson took over the third spot at the halfway point. Brauer cruised home for the win with Johnson, Gullikson, Dave Solum and Wiersgalla rounding out the top five. Wiersgalla and Johnson took home the heat race wins.

Scott Demmer took the early lead in the Elma Performance and Fabricating USRA B-Modified feature with pole sitter Cole Queensland close in second. Kylie Kath found himself in third early on with Brandon Hare and Alex  Williamson racing for fourth. 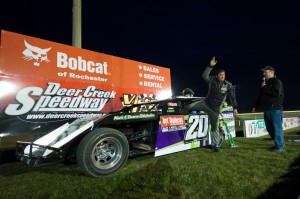 Queensland started to pressure Demmer for the lead. On lap five they were side by side for the lead while Cory Crapser moved around Hare for the fifth spot. Kath followed Queensland past Demmer to take over the second spot on lap eight while Crapser now raced with Williamson for the fourth spot. A caution flew over the speedway on lap thirteen for Kath in turn four. On the restart Queensland took over with Crapser flying around the high side into the second spot. Two more quick restarts saw Crapser continue to apply pressure to Queensland but another caution would fly just as his momentum got going. The final restart on lap sixteen saw Queensland move out front with Crapser getting pressure by ninth place started Erik Kanz. Kanz took over the second spot as the white flew over the field. Queensland came home with the win followed by Kanz, Crapser, Williamson and Matt Jones. B-Feature was won by Dan Hovden. The 31 cars on hand were split into four heat races which were won by Hare, Crapser, Queensland and Jacob Bleess.

Looks like opening night jitters plagued the NAPA AutoCare USRA Modifieds as too many cautions caused the race to be shortened tonight. I can’t recall this ever happening for this class before at the speedway and hopefully we won’t see it again. Steve Wetzstein pulled out in front of Doug Hillson out of turn two but going into three Josh Angst took the early control of the race. The first caution flew for a failing tire on Hillson’s machine on lap three. On the restart Keith Foss, Joel Alberts, Dwaine Hanson, Nate Wasmund and Craig Shaw were involved in a wreck. All cars continued on the next restart. Angst led with Wetzstein in 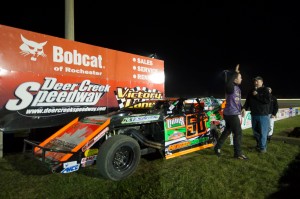 second. Brandon Davis started to pressure for the second spot. With seven down Davis took over the second spot. Caution flew on nine and then the problems started. Angst, Davis, Brad Waits, Lance Hofer and Jason Cummins were top five as another caution flew on lap eleven. Davis got a good run on lap twelve to take over the lead as another caution flew on lap thirteen. Davis led on the restart with Waits now taking over second. Cummins moved into fourth as the fifth caution flew on lap fifteen. Cutting five laps from the twenty five lap feature. Davis led with Cummins and Waits racing for second. Waits held onto the next yellow on lap sixteen changing the race to a green white checker dash to the finish. Davis took home the win, Cummins worked under Waits for second, Angst and Hofer rounded out the top five. Heat races were won by Angst, Cummins and Davis.

Racing resumes next Saturday night at 5:00

Ride along with Jacob Gallardo in his #J17 USMTS Modified for his heat race at Deer Creek Speedway in... read more

SPRING VALLEY, Minn. -- Over the last couple of years, many people have called Ryan Gustin the best Modified... read more

Championship Battles Come Down to Wire 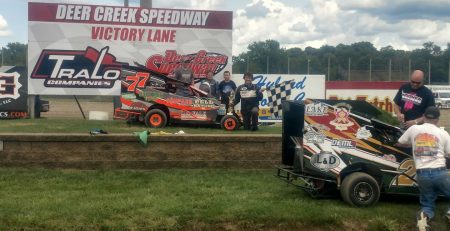